PARTNERSHIP WITH OPPORTUNITY PARTNERS REAPS BENEFITS FAR BEYOND THE SURFACE 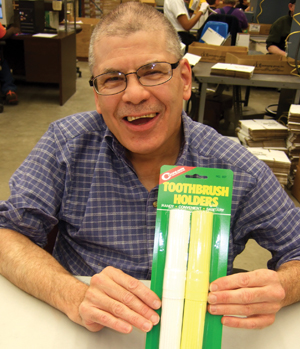 For Robert, a huge sense of pride came from the praise of his colleagues and supervisors. "That’s how I showed how good I could do," he said. A line leader who has worked at Opportunity Partners more than 20 years describes Robert as a great worker. "I think he’s worked about every Coghlan’s job we’ve had here," she said. "He’s always had a positive attitude, and I’ve seen him progress to working mostly community jobs now."

After seven years at Opportunity Partners, Robert expressed a desire to leave the warehouse and work in the community, which he has now been doing successfully since 1996. Paul Fredendall, one of Robert’s supervisors, said he has mastered jobs requiring a high level of detail. "His memory retention is phenomenal," he adds.

Thanks to years of working on Coghlan’s products, Robert has vastly improved his ability to read as well as the opportunity to match serial numbers on products, use simple hand tools, sort a variety of different items, and provide direction to peers. "He’s very curious, and one of the first things I noticed about working with Robert in the community was his desire to grasp the big picture of a project he was involved in," Paul said.

During Robert’s training at one company, he often inquired about where the product was coming from and where it was going once he sent it down the production line. "Once he realized that there was a team of people working on the products, Robert became even more excited about the work he was doing because he understood the need to work at a steady pace to feed the production line," Paul added.

Coghlan’s looks forward to a continued relationship with Opportunity Partners and takes pride in the work of the people they employ. "Thanks to companies like Coghlan's, we are able to see people gain skills and confidence that can carry over into all areas of their lives," said Jon Thompson, President and CEO of Opportunity Partners.  "The increased independence and pride in a job well done is inspiring to all of us."

Since its inception in 1959 by Norm Coghlan in Winnipeg, Manitoba, Canada, Coghlan’s Ltd. has been the leading supplier of camping accessories worldwide for nearly 50 years.
In the mid 1960’s, Coghlan’s added a central warehouse in St. Paul, Minnesota to better serve its U.S retailers and distributors.

Norm, a philanthropic businessman, strongly believed in giving back to his community. As a result, he offered Minnetonka-based non-profit, Opportunity Partners a chance to assist with the assembly and packaging of Coghlan’s camping accessories.

This partnership with Coghlan’s spurred rapid growth for Opportunity Partners. As a result, the special needs-focused organization, which got its start as a small workshop in a garage, has grown into an organization serving 1,500 people with disabilities every year.

Today, Coghlan's remains one of Opportunity Partners' largest clients - and by far its oldest, helping thousands of people with disabilities live more independently for over 40 years.
Coghlan’s partnership with Opportunity Partners reinforces the ideal that both business and not-for-profits can work together and benefit from one another. For Coghlan’s, remaining true to Norm Coghlan’s fundamental belief in the importance of the local community has proven a successful core business strategy.